The validity and justification of violence in attaining one’s goals is dependent upon the circumstances that lead to the conflict and what one hopes to achieve.  In the case of self-defense, it is rarely, if ever, successfully argued that force is not justifiable to protect oneself from bodily harm.  The initiation of force or the threat of force is the deciding factor that separates a defender from an agitator.  If one values his life, it is imperative for him to have the means and willingness to protect it, even in the event of violent conflict.  So long as it is not initiated, violence is a perfectly reasonable tool to achieve the goal of survival.

The concept of survival is not exclusive to the individual.  Though self-defense is oft thought of pertaining solely to singular persons or small groups, collectives do exist in that people are grouped into near-infinite numbers of categories and those groups can be of any relative size.  Because such groups or collectives are made of individuals, their survival is perhaps of higher importance in terms of sheer numbers compared to that of an individual.  For example, the death of one person pales in comparison to the slaughter of millions, though both situations are indeed tragic.

The necessity for individuals within a clan to defend that clan as a whole stems from the fact that the death of the group includes the death of the individual.  When it comes to survival, it is within an individual’s best interest to secure the continued existence of the clan they find themselves in.  Ethnic groups are in a precarious position regarding self-defense because they are unable to change their ethnicity.  They are part of their ethnic group, and their children will be as well, so it is doubly crucial to ensure the continuity of their race.  If they allow their race to dwindle away, become a minority among hostile clans, or otherwise be targeted for genocide, they are committing suicide en masse, sacrificing their children, and desecrating the work of their forefathers.

When governments enact foreign and domestic policies that create the conditions for the destruction of an entire race, those of that race face the daunting task of doing everything in their power to defend themselves.  This is the situation white westerners find themselves in now.  They are being relentlessly propagandized and discouraged from having children and their numbers are falling well below replacement levels in their own countries while competing ethnicities only grow exponentially.  Millions of third-world migrants are flowing relatively unobstructed into first-world white nations.  These hordes seek wealth and benefits at the expense of native white populations, yet they bring no value to the societies of which they leach from.  Governments are even seizing property to hand over to these invaders.  In South Africa, there is an open threat from their government to genocide whites who’ve lived there for generations.

In these waning days of civilization, western men are rapidly coming to the realization that in order to ensure the survival of the white race and the continuation of the freedom and prosperity their ancestors fought so vigorously for, the use of force may become an unfortunate necessity.  The divisiveness between the right and left all across the west is reaching its peak.  The merit of ideas and good arguments in debates no longer determines whether one is right or wrong; the power to forcefully exert one’s will does.  This is clear as rioters, Antifa, and illegal immigrants get away with all sorts of horrible crimes, including murder, rape, and destruction of property.  They avoid consequences for their actions because they are numerous and powerful enough to resist arrest, and the powers that be seem to find nothing wrong with bowing to their whims – in fact, they are happy to do so. 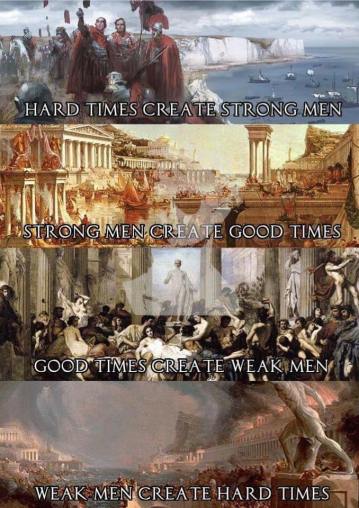 Though governments do much to keep arms away from the hands of their citizens, they will not be able to stop the awakening of increasingly furious right-wing men, and those men will obtain the weapons necessary to ensure their survival, no matter the cost.  Militias will form, fighters will train, and history will be made of the same blood spilled from thousands of years of war.  Many have warned of this impending repetition of conflict, but few have listened.  The consequences will be brutal and victory will be decisive, for those who know their lives, the lives of their families, and the existence of their people are on the line, will do whatever it takes to win.

There is not much time left to steer away from war.  The window of opportunity for peaceful resolution is closing, if it’s not already closed.  Prepare yourself accordingly.